You've role-played as a cyberpunk, a steampunk, or a dungeonpunk, but have you played-

Anarchopunk 2020 tells the story of our dark present. You're a musically-minded anarchist in a band, working to sabotage the abusive systems that infest our societies. You'll need to engage in direct action, concerts, and break the law to break the cycle of oppression, all to the tune of the purest 1990s edginess I could muster. Will you break the chains holding us all back, or will you fall, crushed by a merciless authority?

Anarchopunk 2020 features a innovative system where anarchists don't obey the rules—rules are inflicted on them by the system! Your punk's mechanics are defined in-game, as the system tries to label you, and by rejecting or accepting those labels, you define your own identity! But be careful—if you let the system define you, it'll own you!

But you've got an edge, you're powered by punk! Play your favorite songs to gain an edge over the system during the game, and play out your music video rebellion!

Too soon?! Hell no! Not soon enough!

Generate heat as you struggle against the system, then turn your disobedience into protest and revolt! Pregenerated cards in PDF or PNG provide easy reference for game mechanics, and deck files and guidelines are included for use to with Tabletop Simulator for safe social distancing. And it's cross-compatible with Skatepunk: OPUSR if you want to ride the revolution!

Pay what you want (or nab it for free) and share it with your friends! Share it with your enemies! E-mail it to strangers! Anarchopunk 2020 is licensed to you as Creative Commons (CC-BY ND)!

What are you waiting for? Rise the fuck up, and do it loud!

Anarchopunk 2020 is a modern punk rpg about opposing states and other hostile systems. It wears the loose-fitting clothing of a satire (directed at a certain other property,) but it's notably deeper than that, and it has concepts and mechanics that stand firmly on their own.

The PDF is 28 pages, with solid layout and clear writing, plus some well-placed and extremely well-edited art.

Mechanically, Anarchopunk has an unusual and flavorful game loop. Any time a PC does something punkish, they gain heat. When a PC gains heat, the GM can use that heat to attack them. The more heat they've accumulated, the harder the attack. Essentially, this simulates how states respond to resistance.

Heat can be lowered, which reduces the GM's ability to unilaterally take PCs off the board, but heat can also be used in a gamble to make PCs more effective or to weaken the GM's hold on the story. To put it another way, getting the state's attention and using that attention to highlight the flaws and overreach of the state is how the game frames the path to winning.

Setting-wise, Anarchopunk expects to be set present day, present time, but there isn't anything in the game specifically anchoring it to that. You can use this to tell stories about friction between communities and states, regardless of whether they're real or not. The only requirement is that you use punk themes at the core of your setting, not punk trappings on a game that's otherwise about the agents of the state.

Probably the strongest and most refreshing element in Anarchopunk is that it frames the rules of the game as the enemy. The GM is the system. The system is given advice on how to beat the players. There's a small bonus buried in the book for players who ignore the rules.

The element that felt flattest to me was Anarchopunk's theme of music. The PCs are, by default, in a band, and I had a hard time not seeing this as a silly beat conflicting with the rest of the game's more serious tone. Still, if you'd prefer a more light-hearted game, there's definitely room to do that as well within Anarchopunk's framework, and the inclusion of music gives the system some versatility.

GM-wise, solid advice on how to run Anarchopunk is scattered throughout. Safety tools are provided, as are the basic precautions that you put in a game if you think someone might try to use it in bad faith.

Overall, if you've bypassed this because the idea of running a modern day punk game feels too realistic or too bleak, that's fair and I completely understand. However, there's really cool mechanical design in here, and the game has a much wider range than I was expecting. I think it's worth a look.

This is super rad designed and i like the idea but i couldnt really figure out how to play it (it IS a game after all or is it some conceptual statement about not having rules?)

Is it for two people + or also a single person?

It is a game, but it's a relatively loose one compared to something like a lot of mainstream role-playing games or board games. It's more akin to cooperative storytelling where you're making a story together, with the rules to provide prompts and suggestions about where they story should go next. As you might suspect, it's pretty loose; IMO, it probably wouldn't fit the theme to be shuffling miniatures around or counting up XP.

I admit this isn't probably a good introduction to role-playing games, particularly the "storygame" kind, if you're not familiar, as it was written pretty off-the-cuff. I'd suggest around two to five players running punks and one player running the system.

If you have specific questions, just let me know, and thanks for giving it a look!

Well sounds like a cool concept for sure and i agree on the part with the figurines & XP :;D

Yeah i guess i will need to wait till the whole covid situation cooles down a bit before i can try with some friends tho.

Thanks! When you get around to it, let me know how it goes. 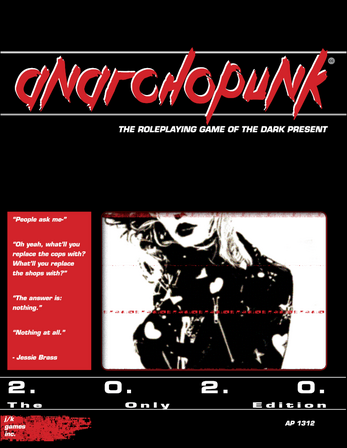 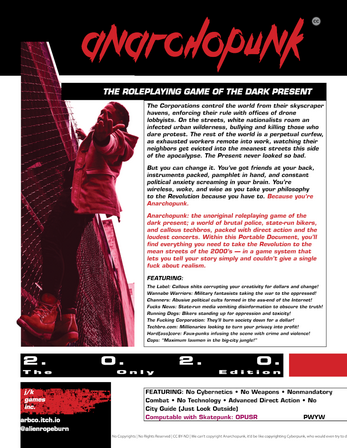 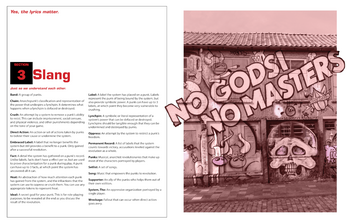 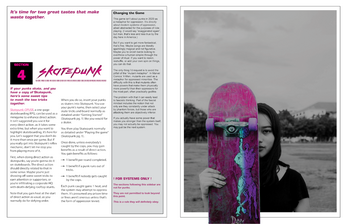