They came from another world, but it's not an invasion, it's an immigration.

Dragons, devils, and druids live among us, just trying to get by. Holy swords are put to use chopping carrots instead of slicing skeletons. The Mystery Integration Bureau oversees the the newcomers' introduction to modern Earth society, while ordinary people acclimate to the strangers. And not everything is going to go smoothly... where does a witch park her walking hut? What's it like having an unicorn for a roommate?

Can a stone golem keep up in the fast-paced world of advertising?

Winner of the Okashicon x NinjaHELL! Productions Anime RPG Design Contest,MELWAFF: My Exciting Life With a Fantasy Foreigner is a tabletop storytelling RPG dramedy where everyday people meet fantasy folk and anime-styled hijinks result. Play an Earth native, a fantasy "newcomer", or a M.I.B. agent and tell a story of what happens when the magical and bombastic meets the modern world. Seek your dreams either mystical or mundane, as your friends join in with shenanigans. Enjoy legitimate surprise mechanics as the "Fate Deck" introduces new twists and hopes throughout every episode of play!

A tabletop RPG for 4-8 players. Includes a 22 page rulebook, a print-and-play tarot deck designed by Christopher Reynolds for use with the game, or it can be played with an existing tarot deck.

In order to download this storygame you must purchase it at or above the minimum price of $2.95 USD. You will get access to the following files:

MELWAFF is a 22 page slice-of-life game about a modern world dealing with immigration from a fantasy dimension.

It's a group game, and tarot-based, and the overall tone is comedic and light-hearted.

It also uses an episodic structure, and it deliberately sets up one character as the main character of each given episode. Players have a fair bit of control over whether they want to be the main character, and the supporting cast is still plenty involved, so this doesn't come off as intrusive, and it makes for a kind of interesting natural character-development spotlight.

Character progression is kind of weird and crunchy, in that you play a card game to accomplish it, but it's also extremely soft in that you don't mechanically advance your character---you determine whether they made progress towards achieving their dreams at the end of the episode. I found myself liking this a lot, and it ties very well to the softer tone of the game. 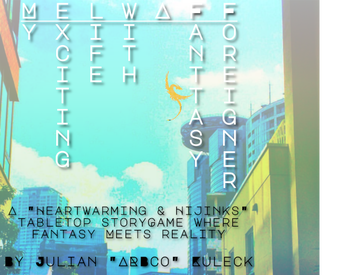